Ragnar Lothbrok’s hair on the hit shows Vikings may be one of the most awesome hairstyles we’ve ever seen on TV! The Ragnar Lothbrok hairstyle, made possible by actor Travis Fimmel, can be best characterized as a braided variation of a top knot or man ponytail with shaved sides. Although we probably wouldn’t recommend trying Ragnar’s haircut unless you already have a muscled body and look like a badass warrior, it’s cool to imagine growing your hair out and experimenting with this Viking haircut.

Ragnar Lothbrok wears a beard all throughout the T.V series the Vikings. There is no scene or episode where the actor is seen without a beard. His beard is long and well kept. It is shaped in a perfect ‘V’. Travis Fimmel grew his beard and maintained it on his own without the help of any professional and he did a fantastic job at it.

Throughout the show, Travis Fimmel is flaunting the varied lengths of beards. In the first season he is seen in a very shot well-groomed beard as the show progresses we see the beard length increase as well. His beard was mostly in a ‘V’ shape and was continues to grow in that direction.
His hairstyles along with his beard styles complimented each other well. The length of the beard depended upon the length of the hair too. The shorter the beard is the longer the hair, and, vice versa. This has been the trend on the show, and we’ve witnessed it. 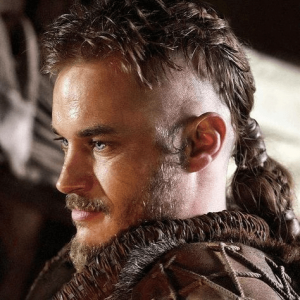 in the initial episodes, Ragnar is seen wearing a short beard, as the focus is supposed to be drawn onto his hairstyle rather than his beard as his beard is still in the process of growing out. 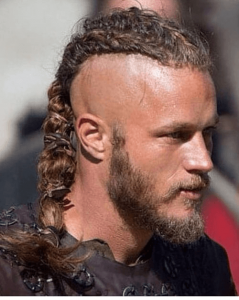 in the second and the third season when Ragnar’s beard is still growing he is shown with a very sophisticated beard and hairstyle. This suited his physique and his appearance a lot. He coupled this beard style with long dreads tied up together with a half-shaven head. This look was classic because of the beautiful eagle head tattoo.

4.The bald, but long bearded look: 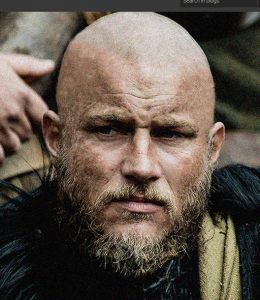 during the end of the third season, Ragnar is seen with a bald head and a beard which is very long. This look made him appear wise and powerful. It was perfect because at this time he is the ruler and his hair and beard style did justice to the role completely. 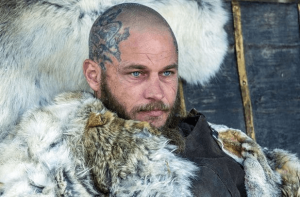 during the first two seasons, Ragnar grows his beard and by the third season, he has a powerful beard because he is to become the powerful Viking King. Since he had to play the role of a king, the team behind The Vikings played extra attention to his beard and hairstyle. Here his beard starts from his sideburns but he is bald on the sides of the head with a ‘V’ at the back. 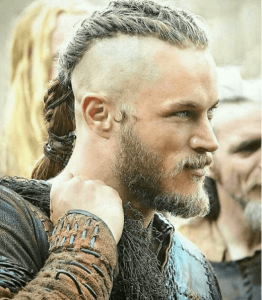 Ragnar looks dashing with braids on the TV series. He wears these in the series with his head shaven from both sides of the braid. There are multiple braids that are made beginning from the temple and the French braid goes all the way to the back. He compliments this look with a beard that is short and a mustache. The beard starts from the temple region and extends to the chin. 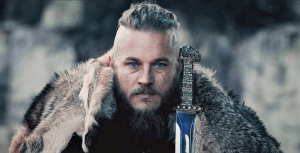 in the second and the third season when Ragnar’s short curls are still growing he is shown with a very sophisticated beard and hairstyle. This suited his physique and his appearance a lot. He coupled this beard style with long dreads tied up together with a half-shaven head.

8.Ragnor Mohawk with Huge, Round Beard: 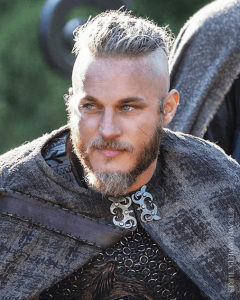 If you want your Viking hairstyle to have even more of a bad boy edge to it, pair it with a mohawk! Although we don’t particularly recommend fanned punk mohawks for the Viking aesthetic, we do encourage you to opt for wider mohawks and fully shaved sides

What if you love Vikings, but aren’t up for dealing with the maintenance that comes with long hair? Then combine your rough beard with an easier haircut, such as the crew cut. Add an undercut to the mix for extra style. 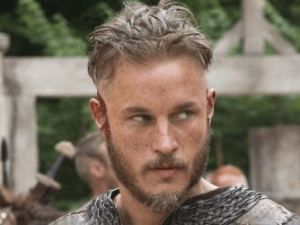 In this series, he’s also sometimes seen wearing extensions hair. If you wish to style hair extensions easiest way to get them is at the salon. A professional perfect barber will be able to do the cool job at adding extensions to the hairs. 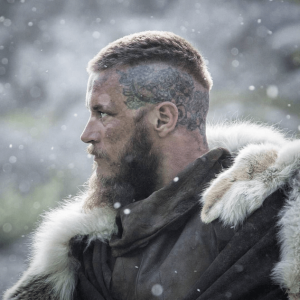 in this series, Travis Fimmel is also seen wearing shorter hair. Well, short hair is an understatement. In few episodes of the series, he’s shown to have short hair. He’s also bald with the hair only on a middle part region of the head. At back there’s a Viking of sorts. This haircut is complete with the tattoos on the bald part of the whole head. 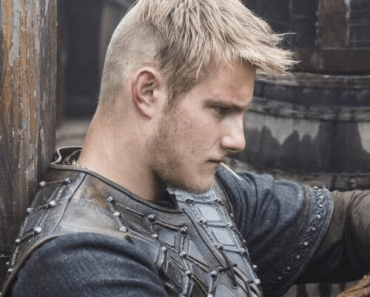